An interdisciplinary area of research dedicated to all the people interested in the link between emotions, affects and immunology

Immuno-moodulin: a new target for the treatment of Obsessive Compulsive Disorders (OCDs) and related diseases

We are delighted to share with you the publication of our recent article on Immuno-moodulin www.sciencedirect.com/science/article/pii/S0889159119315600
​
​In this study we have shown that mice that are prone to develop autoimmune diseases show very high signs of anxiety (see videos of control mice here and anxious mice here).

These mice express high levels of a protein we have called Immuno-moodulin or Imood. The name stems from the fact that Imood is produced by a particular type of immune cells called T lymphocytes (Immuno-) and by its role as a modulator of anxiety and compulsive behaviour (-moodulin).

As Imood is produced by T lymphocytes and is present in circulating blood, this is one of the few examples of factors that regulate emotional behaviour and mental disorders 'peripherally' e.g. it is not like serotonin or dopamine that are produced by brain cells.
The production of Imood by immune cells has several assets in terms of therapies for mental disorders.

First of all, one could use Imood as a biomarker for OCD and related disorders. A biomarker is something that tells you if you have or not a certain condition. For instance, a temperature above 36C is considered a 'biomarker' for fever. Similarly, measuring Imood could provide a new way to diagnose and potentially assess OCD and OCD severity.
Another major discovery of our study is that generation and testing of antibodies that can bind to and neutralise Imood.

Antibodies are proteins that our body produce to help us dealing with infections or to recognise factors that do not belong to us (for instance, the toxins of other animals). They are extremely specific (like a lock for a key) and because of their nature, they have been used as drugs to neutralise or lower the levels of proteins that cause diseases. For instance, antibodies against a protein called Tumor Necrosis Factor-alpha (TNF-alpha) have been used to treat several immune disorders such as rheumatoid arthritis because TNF-alpha is very high in rheumatoid arthritis and drives the persistent state of inflammation of the joints that is typical of this disease.

As Imood is a protein like TNF-alpha, it has been possible for us to design antibodies that can bind and neutralise the effects of Imood. When we administered 1B10 and 1C4 anti-Imood antibodies to mice, we noticed a significant reduction in their anxiety behaviour. This is clearly shown in the two videos below.

What you see is an experimental system to study anxiety in mice that is called "Light and Dark shuttle box". Mice are nocturnal animal and prefer to stay in the dark (left black compartment of the system). However, if they feel 'safe' and 'relaxed'  - they leave the dark chamber and explore the white lit area (mice are curious animals too).

In the two videos shown below, it is possible to see how mice treated with anti-Imood antibody 1B10 make several more crossings and stay for longer in the lit area compared to the control untreated mice.
These results have also been reported in the graphs here below where it is possible to appreciate the increase in the number of crossing and time in the lit area in mice that have received anti-Imood antibodies 1B10 and 1C4 compared to mice that received a non-specific antibody (IgG).
The results of these studies suggest that antibodies against Imood might represent a new way to treat mental disorders such as OCD.

The advantage of this approach could be that because the antibodies block a factor that is present in circulation and not in the brain, there might be a reduced chance of experiencing side effects that are associated with standard treatments for mental disorders.

In addition to this, antibody-based therapies (also known as biological therapies) have the advantage of been administered less frequently (generally once every two weeks) because antibodies tend to stay in circulation for longer. As a result of this, patients would take their treatment less frequently and hence might experience a reduction in side effects that are normally associated with daily long term use of neuromodulators.

​Could massage boost your immune system?

Massage is one of the oldest therapies in existence.

While for some it's an occasional indulgence, it's also been claimed that massage can help a whole range of conditions, from back pain and sore muscles, to alleviating the side-effects of some cancer treatments.But while massage may make us feel good, can it really have an impact on our health?
​
The experiment
We teamed up with Prof Fulvio D’Acquisto, an immunologist from the University of Roehampton and the Bodyology Massage School .Fulvio came across research which found that massage boosted the number of white blood cells in patients suffering from HIV, a disease that causes a reduction in a type of white blood cell known as T Lymphocytes.To see if massage might have the same effect in people without serious immune conditions, we invited 7 volunteers in for a massage.
First we took a blood sample from each of them and analysed it for the number of T Lymphocytes present. This served as a baseline reading.
Next we asked them to lie down and relax for an hour, before taking another blood sample. This was so we could be sure that when we tested their levels after a massage, any changes in T Lymphocyte count were due to the massage itself, not simply the effect of an hour’s relaxation.
Then came an hour’s massage. Immediately after the session, we took a third and final blood test.

The results
Compared to the baseline results, the results from the group after the massage showed a 70 per cent boost in white blood cells. This was also a higher reading than we got from the volunteers simply relaxing.
The immune system is complex, and it’s not simply the case that increasing the white blood cell count in a person who already has healthy levels will improve their health. However T-lymphocytes do perform a wide array of functions in the body involved with growth and repair, which could in part explain why massage has been reported to help with so many conditions.

Living in a mentally and physically stimulating environment has been suggested to have a beneficial effect on the immune response. This study investigates these effects, utilizing a 2-week program of environmental enrichment (EE) and 2 models of acute inflammation: zymosan-induced peritonitis (ZIP) and the cecal ligation and puncture (CLP) model of sepsis. Our results revealed that following exposure to EE, mice possessed a significantly higher circulating neutrophil to lymphocyte ratio compared with control animals. When subject to ZIP, EE animals exhibit enhanced neutrophil and macrophage influx into their peritoneal cavity. Corresponding results were found in CLP, where we observed an improved capacity for enriched animals to clear systemic microbial infection. Ex vivo investigation of leukocyte activity also revealed that macrophages from EE mice presented an enhanced phagocytic capacity. Supporting these findings, microarray analysis of EE animals revealed the increased expression of immunomodulatory genes associated with a heightened and immunoprotective status. Taken together, these results provide potentially novel mechanisms by which EE influences the development and dynamics of the immune response.
Here is the link to the full article
And here is the picture of the "holiday suite" we have used for our studies. Fully loaded with exercise machine (wheel), relaxation hiding space (paper tube), a meeting hub (castle) and plenty of sawdust (sand beach) to roll into. 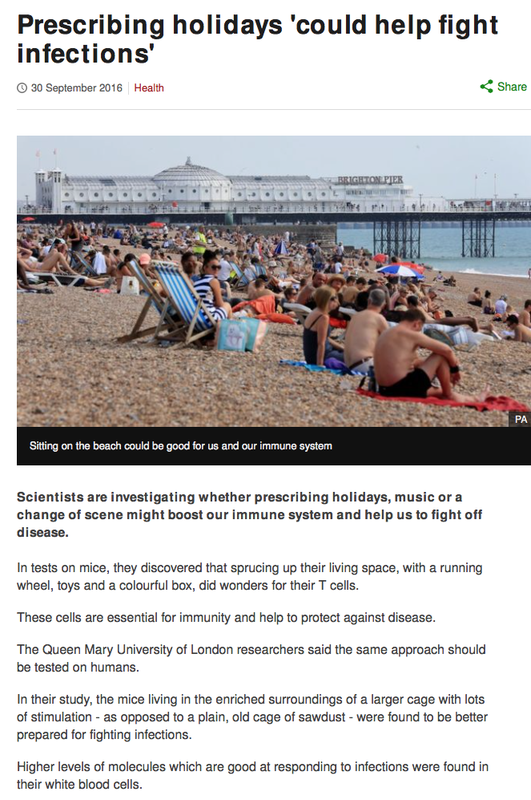 The abstract of the original publication

Lorenza Rattazzi1, Giuseppa Piras1, Samuel Brod1, Koval Smith1, Masahiro Ono2 and Fulvio D’Acquisto1*T cells are known to be plastic and to change their phenotype according to the cellular and biochemical milieu they are embedded in. In this study, we transposed this concept at a macroscopic level assessing whether changes in the environmental housing conditions of C57/BL6 mice would influence the phenotype and function of T cells. Our study shows that exposure to 2 weeks in an enriched environment (EE) does not impact the T cell repertoire in vivo and causes no changes in the early TCR-driven activation events of these cells. Surprisingly, however, T cells from enriched mice showed a unique T helper effector cell phenotype upon differentiation in vitro. This was featured by a significant reduction in their ability to produce IFN-γ and by an increased release of IL-10 and IL-17. Microarray analysis of these cells also revealed a unique gene fingerprint with key signaling pathways involved in autoimmunity being modulated. Together, our results provide first evidence for a specific effect of EE on T cell differentiation and its associated changes in gene expression profile. In addition, our study sheds new light on the possible mechanisms by which changes in environmental factors can significantly influence the immune response of the host and favor the resolution of the inflammatory response.

journal.frontiersin.org/article/10.3389/fimmu.2016.00381/full?utm_source=FRN&utm_medium=EMAIL_IRIS&utm_campaign=EMI_XIA_161001_Milestones_Author_article_impact_page#
(We have recently coordinated the publication of a volume of Current Opinion in Pharmacology dedicated to the understanding of the link between emotions and immunity in the context of pharmacological therapies for immune diseases or mental disorders. The editorial overview (link  plus Figure below) provides a succinct summary of all the contributions to this volume and some comments on the potential implications of current findings in this field.The topics explored are: 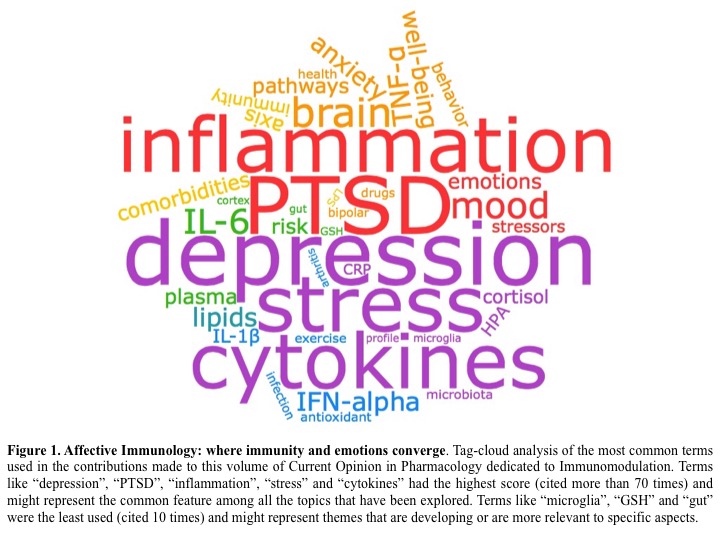