This interesting review by Ruslan Medzhitov at Yale University provides a new and refreshing overview of inflammation as a 'positive and essential' response of the body to a variety of conditions.
Origin and physiological roles of inflammation
Ruslan Medzhitov
Inflammation underlies a wide variety of physiological and pathological processes. Although the pathological aspects of many types of inflammation are well appreciated, their physiological functions are mostly unknown. The classic instigators of inflammation — infection and tissue injury — are at one end of a large range of adverse conditions that induce inflammation, and they trigger the recruitment of leukocytes and plasma proteins to the affected tissue site. Tissue stress or malfunction similarly induces an adaptive response, which is referred to here as para-inflammation. This response relies mainly on tissue-resident macrophages and is intermediate between the basal homeostatic state and a classic inflammatory response. Para-inflammation is probably responsible for the chronic inflammatory conditions that are associated with modern human diseases. 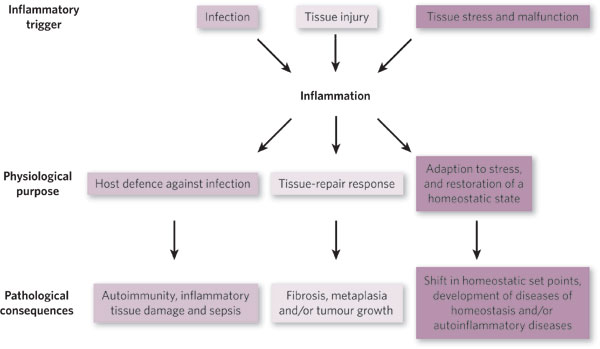 FIGURE 1. Causes, and physiological and pathological outcomes, of inflammation.
Depending on the trigger, the inflammatory response has a different physiological purpose and pathological consequences. Of the three possible initiating stimuli, only infection-induced inflammation is coupled with the induction of an immune response.
Click here to access the full text
This seminal paper demonstrates that the immune response is only in part influenced by genetic factors while showing the key role of non-heritable factors
Variation in the human immune system is largely driven by non-heritable influences.
Brodin P, Jojic V, Gao T, Bhattacharya S, Angel CJ, Furman D, Shen-Orr S, Dekker CL, Swan GE, Butte AJ, Maecker HT, Davis MM.
​
AbstractThere is considerable heterogeneity in immunological parameters between individuals, but its sources are largely unknown. To assess the relative contribution of heritable versus non-heritable factors, we have performed a systems-level analysis of 210 healthy twins between 8 and 82 years of age. We measured 204 different parameters, including cell population frequencies, cytokine responses, and serum proteins, and found that 77% of these are dominated (>50% of variance) and 58% almost completely determined (>80% of variance) by non-heritable influences. In addition, some of these parameters become more variable with age, suggesting the cumulative influence of environmental exposure. Similarly, the serological responses to seasonal influenza vaccination are also determined largely by non-heritable factors, likely due to repeated exposure to different strains. Lastly, in MZ twins discordant for cytomegalovirus infection, more than half of all parameters are affected. These results highlight the largely reactive and adaptive nature of the immune system in healthy individuals. 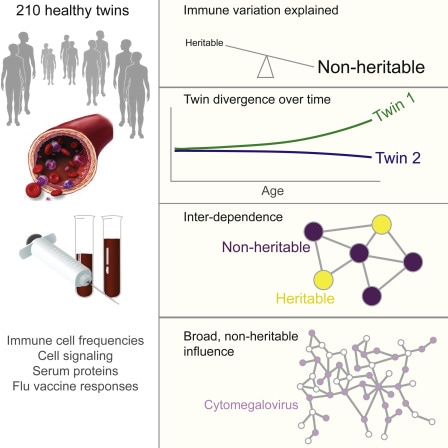 CLICK HERE TO ACCESS THE FULL TEXT
A ground-breaking studies showing that the immune response of pet-shop animals is much closer to that of human compared to that obtained with laboratory animals
Normalizing the environment recapitulates adult human immune traits in laboratory mice.

AbstractOur current understanding of immunology was largely defined in laboratory mice, partly because they are inbred and genetically homogeneous, can be genetically manipulated, allow kinetic tissue analyses to be carried out from the onset of disease, and permit the use of tractable disease models. Comparably reductionist experiments are neither technically nor ethically possible in humans. However, there is growing concern that laboratory mice do not reflect relevant aspects of the human immune system, which may account for failures to translate disease treatments from bench to bedside. Laboratory mice live in abnormally hygienic specific pathogen free (SPF) barrier facilities. Here we show that standard laboratory mouse husbandry has profound effects on the immune system and that environmental changes produce mice with immune systems closer to those of adult humans. Laboratory mice--like newborn, but not adult, humans--lack effector-differentiated and mucosally distributed memory T cells. These cell populations were present in free-living barn populations of feral mice and pet store mice with diverse microbial experience, and were induced in laboratory mice after co-housing with pet store mice, suggesting that the environment is involved in the induction of these cells. Altering the living conditions of mice profoundly affected the cellular composition of the innate and adaptive immune systems, resulted in global changes in blood cell gene expression to patterns that more closely reflected the immune signatures of adult humans rather than neonates, altered resistance to infection, and influenced T-cell differentiation in response to a de novo viral infection. These data highlight the effects of environment on the basal immune state and response to infection and suggest that restoring physiological microbial exposure in laboratory mice could provide a relevant tool for modelling immunological events in free-living organisms, including humans. 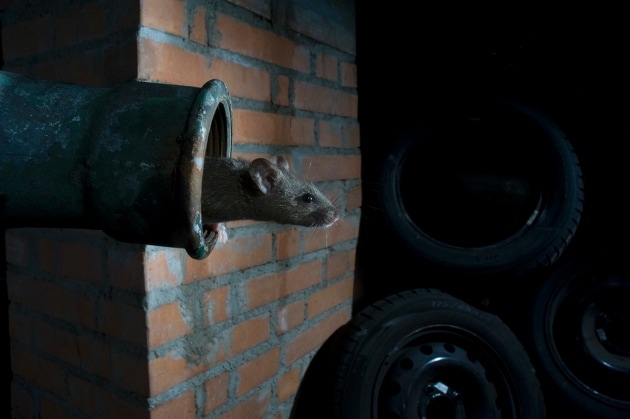 ​Most scientists stocking a lab with mice order the animals from a commercial supplier. But David Masopust, an immunologist at the University of Minnesota in Minneapolis, chose a more difficult route. He decided to catch wild mice in a barn at a petting zoo — where he then had to fend off a cockatoo vying for one of the trapped mice. “You do question what exactly you got yourself into,” he says.
Masopust went to such lengths because he doubted that commercial lab mice — selectively bred in sanitized environments — are good research analogues for people, who do not live in such clean conditions. In a paper online in Nature (Beura, L. K. et al. http://dx.doi.org/10.1038/nature17655; 2016), he and his colleagues show that wild mice and mice from pet shops have strong, complex immune systems that mimic those of adult humans. Exposing lab mice to these ‘dirty mice’ strengthened their immune systems and made them more human-like.
Therapies tested in lab mice rarely translate into humans, and researchers have long thought that differences between human and rodent immune systems may be partly to blame. Lab mice, for instance, have very low levels of some types of the immune cells called memory CD8+ T cells compared with adult humans. In people, these cells mature during childhood after exposure to viruses and other pathogens, and help to fight against infections and cancers.

CLICK HERE TO READE THE EDITORIAL ABOUT THIS PAPER